Babessi : Total mobilisation for the CPDM 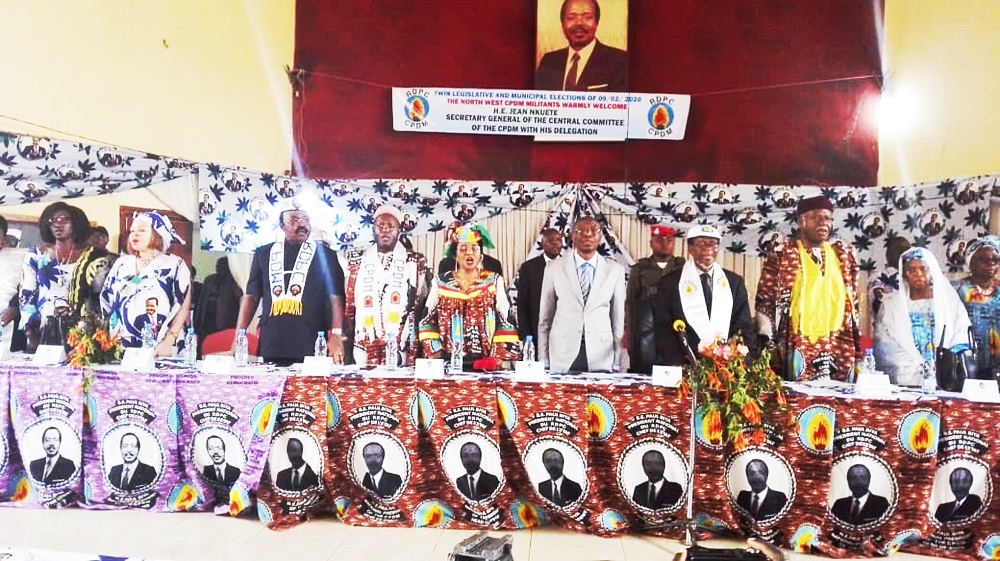 The Secretary General had motivational words for militants, sympathizers, and supporters of the Party when he campaigned in the Northwest Region on Wednesday.

In the context of the drawn-out shaky situation in the Northwest, the scribe of the ruling party was in the region to lift up the spirit of CPDM candidates for the 9 February twin elections. He moved the crowd at the congress hall in Bamenda with his words. Jean Nkuété in a speech that was frequently interrupted by applause from the militants and supporters of the Party, pointed reasons why candidates of the Party deserve the votes of the population in the Northwest. The Secretary-General argued the importance of the February poll. He attacked the armed groups fighting for a breakaway of the two regions and called them “sellers of illusion” and praised members of the Party for kicking against them. The CPDM, according to the Secretary-General is the “only political party that stands permanently and effectively” with the population during the period of the once deepening crisis in the two English- speaking regions of the country. Wins in the two elections, we give the Party an opportunity to help the suffering population.

Here, a sweep of all councils and parliamentary seats in the Northwest region seems to be a must for the party. “Let us vote massively for the CPDM candidates to give the municipal councillors the energy they need to effectively face the challenges of immense reconstruction“, the SG noted. “We must give the President the strong majority in the National Assembly to put in place this new Cameroon resulting from the Major National Dialogue“, Jean Nkuété made a case why the CPDM needs to win seats in the Northwest. Since the holding of the Major National Dialogue last September, the President has granted a Special Status to the Northwest and Southwest regions and promulgated the General Code of Local Communities. Wherein, greater autonomy is awarded to regions and councils.

During the SG’s visit, the Regional Head of the CPDM electoral committee for the Northwest extensively explained the merits of the decentralization code and special status

During his brief stay in the region, the Secretary-General enjoined the CPDM to ensure that turnout on election day is massive. “We must, therefore, do everything possible, in accordance with the laws of the Republic, to ensure that voters go to the Northwest to vote in their numbers.” According to Jean Nkuété, the turnout is a gauge on the state of the security situation in the region and Northwest will be “much observed”.

The Secretary General of the Party congratulated the Minister Delegate in Charge of Commonwealth in the Ministry of External Relations for his role in the success story of the Major National Dialogue. “…the Prime Minister, Head of Government has brilliantly led this episode (Major National Dialogue) of our common history, with a worthy son of the Northwest in the person of Minister Felix Mbayu here present as Head of the Technical Secretariat“, Jean Nkuété mentioned.